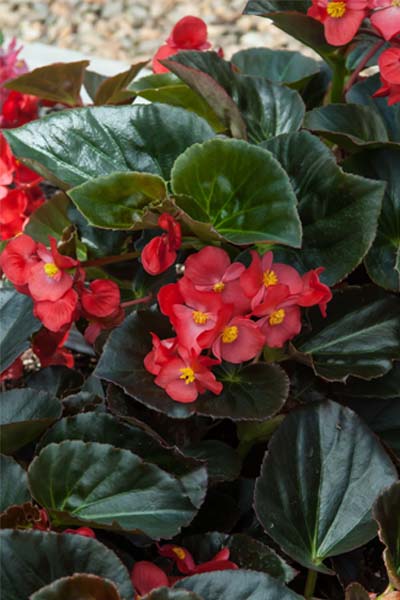 Life seemed as it should for all of us gardeners and horticultural gurus. We loved Big Begonias, Whopper Begonias and Tophat that had just introduced white. Shoot we still had Dragon Wing at the throne when it came to hanging baskets. Then something happened in the space-time continuum of begonias and gardeners. Our happiness has been shaken thanks to Viking begonias.

You see we can’t be happy now until we get our hands on each and every colour in this new series of begonias. These have been the jaw-droppers at all of the trials this summer. Eight standard varieties and 4 that are called XL. You may have heard of the one called Viking Red on Chocolate XL as it is a 2019 AAS Winner.

My gut tells me, however, that this one largely slipped under the radar this year, and to be honest, I would like to know why. At trials which typically seem like an ocean of colour, begonias typically have an uphill battle to steal the limelight from plants like lantanas, zinnias, and salvias, but not the case this year.

The Viking series of begonias is coming from Sakata Seed that also brought us SunPatiens and in a similar fashion, these begonias too are packed with vigour and performance. The eight regular selections are suggested to reach a height of 20-24 inches with a spread of 24 to 28 inches. The XL group takes on a more dwarf azalea frame reaching 28-34 inches tall with a width of 32 to 36 inches or should we say, THREE FEET.

The rows of these begonias were uniform and stunning and seemed to be the gathering place of greenhouse producers, garden centre owners, and professional designers. The consensus was I want it and I want it NOW. To be honest it will be next year before most of us get our hands on it. The wrinkle in that may come from the 2019 AAS Winner Red on Chocolate XL. Seeds are out there although 99.5% of us have never grown a begonia from seed. Visit your garden centre often this season and keep your eyes open, you never know.

You’ll find three leaf colours in the series, bright green, bronze, and chocolate. The foliage is so luscious you want to touch it. While I have touted the size of the plants know also that the flowers are enormous and colourful with rose, pink, scarlet and coral flame. Judges were impressed with how the deep bronze of this year’s AAS Winer remained sharp and intense no matter what area of the country it was grown. Hello Sakata, we want it now!

Decide which cookies you want to allow. You can change these settings at any time. However, this can result in some functions no longer being available. For information on deleting the cookies, please consult your browser’s help function. Learn more about the cookies we use.

With the slider, you can enable or disable different types of cookies: